My primary objective with this project was to learn TensorFlow. I’ve previously used Keras with TensorFlow as its back-end. Recently, Keras couldn’t easily build the neural net architecture I wanted to try. So it was time to learn the TensorFlow API.

I chose to build a simple word-embedding neural net. This seemed a good compromise that was interesting, but not too complex. I didn’t want to simultaneously debug my neural net and my TensorFlow code.

However, “jacket” is singular and “jackets” is plural, so we would expect some difference in the vectors. Easy, the word with a “s” at the end is plural. But, what about “mouse” and “mice” or “goose” and “geese”? Who wants to teach a computer all of the bizarre rules of English? Then repeat the task for Spanish, German, French and so on. Can we learn word vectors without human-labeled data?

Learning word vectors from documents is a nice way to see the power of unsupervised learning. It can be counter-intuitive that a machine can learn without human-labeled data. At first, I associated unsupervised learning with k-means clustering, and not much else. While clustering is useful, it hardly seems exciting.

The Big Idea is to learn the structure in your data before using your precious hand-labeled examples. Consider these two very different approaches:

I hope this gives you some appreciation for the power of unsupervised learning. First, learn the structure and patterns (“regularities” in machine learning speak) from a large set set of data. Then, label a much smaller set of examples. Don’t waste valuable hand-labeled data learning the basic structure of your data. This same approach applies to many domains, including speech and image recognition.

There are many approaches to learning vector representations of words. The approach used here trains a model to predict the “middle” word given the N preceding and N following words. Here is a diagram of the model: 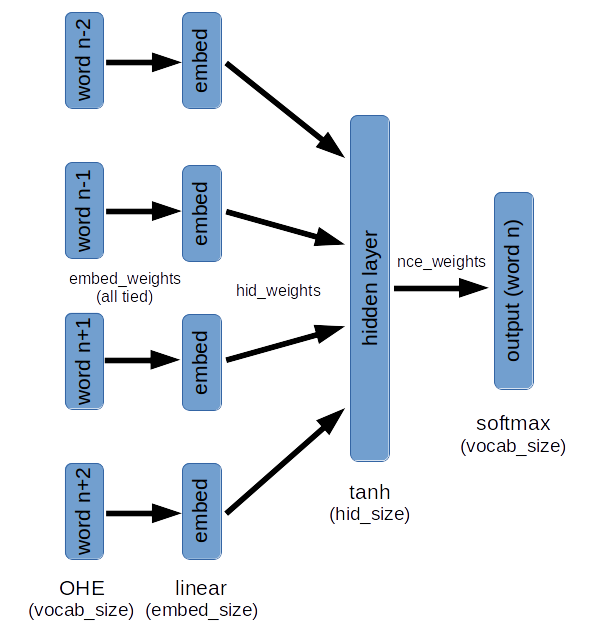 Here are a some key points:

Thanks to Project Gutenberg.

The total vocabulary size of these three books is 11,750 words. The total number of words is ~245,000. The model was trained using stochastic gradient descent (SGD) with momentum. I got better results using SGD with momentum than with either RMSProp or Adam optimizers (see nice post explaining various optimization algorithms). I used a batch size of 32, a learning rate of 0.01 and momentum of 0.9.

I constrained the word vectors to 64 dimensions. Word vectors with 128 dimensions had lower training and validation loss. But, forcing the model to learn a more economical (lower dimensionality) representation leads to more interesting (and perhaps more useful) results.

Here I plugged in a word and found the 8 closest words based on cosine similarity to the learned word vectors.

Pretty amazing, I think. At the beginning of training, this model had no idea that “seven”, “five” and “ten” were all numbers - they were just a meaningless jumble of letters to the computer. And now, having “read” only 3 Sherlock Holmes books, it learned these relationships. 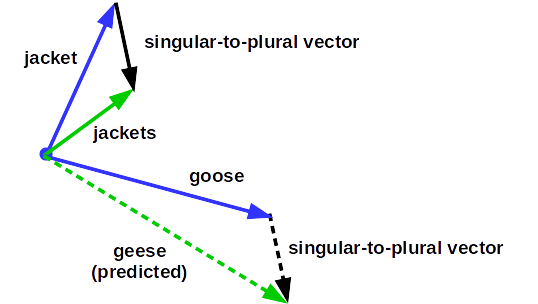 The possibilities here are exciting. Again, we are using a model trained with no human-labeled examples. With a properly trained model, you can query: “Massachusetts” to “Boston” : “Colorado” to “?”. You can reasonably expect to get “Denver” as the result (although not with the Sherlock Holmes training set).

Here are some actual results from the Sherlock Holmes training.

Not perfect, but the answers in the top-5 are certainly encouraging. (Even the ‘lives’ result in the first analogy is interesting.)

The project has 2 major components:

I tried to write clear code for the 3 Python modules. I hope you find them useful for your own work, or just to better understand how to use TensorFlow.

For additional details on the code please see README.md on the GitHub page.